The Barefoot Movement in Church

This past March I had the opportunity to cover the 1st STAC House Show at St. Thomas & St. Denis Church in Cainhoy, otherwise known as the Old Brick Church. I knew they planned another event for the site and was ecstatic when it was announced. Finnegan Bell and The Barefoot Movement. 9.19.15.

The venue is a mere 15 minutes from our driveway, a few miles down the pine canopied, two lane Cainhoy country road. We eased the car through two narrow gate posts and up the faint indention of a dirt drive where a sandy pine-strewn churchyard led us to the hustle and bustle of set up.

The sun was dipping below the pines creating a fast flurry of activity. All hands were on deck—cord setting, light positioning, tent propping, church sweeping, and cork popping. When we signed in, Shane William’s wife Trisha swatted a mosquito off of my forehead and pointed us to the table of repellants.

There was still a half hour before the show, so Don and I promenaded the grounds. St. Thomas & St. Denis Church—one of the ten original Anglican Parishes—is 309 years old. The original building burned in a forest fire but was re-built in 1819. It is steeped in history, both painful and joyful, but such is life. It is the perfect backdrop for a collaboration of community, music, and history. 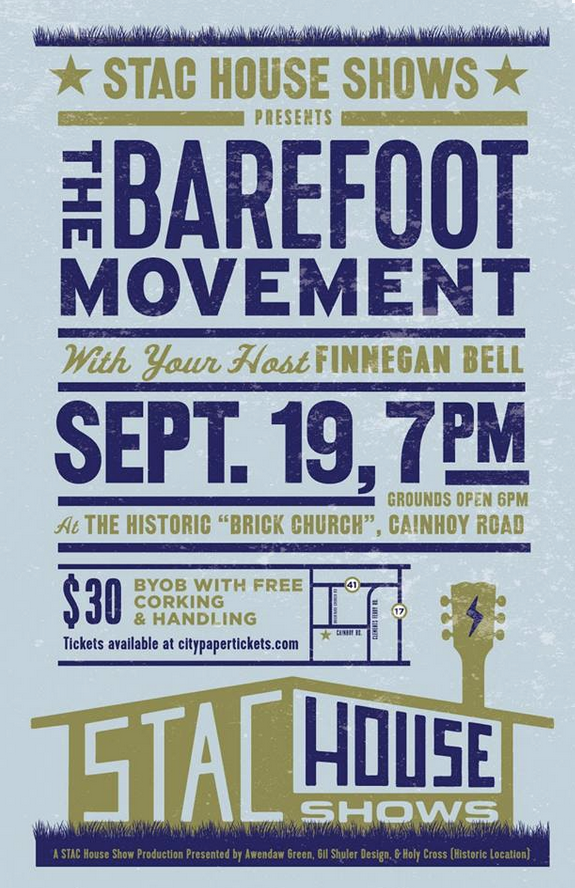 Reverend Hamilton Smith caught up with us around the side of the huge church windows with a can of wasp spray. “As if opening 200 year old church windows on a humid day weren’t enough, I’ve been chasing down the survivors of the largest wasp nest I’ve ever seen,” he said, laughing while inebriating the sole survivor on the pane with a long spray blast.

I‘m glad they got those huge windows open, as it was by far one of the muggiest evenings of late. The crowd thickened as quickly as the humid evening air and so we went in to get our seats. Through the window I saw a beautiful RV in the churchyard sitting beside a road weary older van, the sticker on back read “The Barefoot Movement.”  I figured the RV belonged to the band and the van to it’s roadies. Eddie White of Awendaw Green stopped and spoke with us, noting, “The Barefoot Movement is touring the Southeast and they’ve had a hectic schedule. They left Georgia today and came straight here for the show and then they need to be back in Georgia again tomorrow. Camping world provided the RV for them.” So the muted gold van was actually the bands’.

I asked Eddie White later how this presentation came to be. “I met TBM through my friendship with Anderson Knott who works with Hootie and the Blowfish in Myrtle Beach where the bass player Hase grew up 3 or 4 years ago, and I have continued to support them and watch them grow. They are so authentic, it warms the musical heart. And then to gather with them inside a historic, spiritual structure that is so alive with the juice of generations—it’s just a pleasure to the senses and soul.”

The pews filled as fast as the temperature rose. Ladies were glistening and men were dripping. The last blast of ole’ sol shone through the leaded glass window panes and then it began, the cicadas and frogs kicking off the show. I felt a whiff of a breeze on the back of my neck and turned around in the pew to see the lady behind me had a church fan and was going at it full throttle. She reached down by her purse and handed me another one she had brought. Perfect!!

Shane Williams and Warren Bazemore, the duo comprising Finnegan Bell, took the stage with guest Dean Black, a steel pedal guitar player by trade who tonight was playing an antique National steel resonator guitar. They started the show with their cover of “Hallelujah.” After the set finished, the crowd rushed to their feet in a standing ovation. As far as I was concerned, they’d just set the bar pretty darn high for The Barefoot Movement. Intermission emptied the church for a wisp of night air and refreshments until cowbells rang to signal us to return to the church for the show. I laughed out loud. I will never hear a cowbell ring again without thinking of Christopher Walken and the cast of SNL in their stint “I gotta have more cowbell!”

The Barefoot Movement —Tommy Norris, Noah Wall, Hasee Ciaccio, Alex Conerly, took to the stage, shoeless as promised. They had me from the very first strum of the bass, bow on fiddle, pick of the mandolin, and guitar pluck. I found myself completely out of adjectives to describe them. Their performance was surreal. Like a time warp, I was planted smack dab back in the 1950s seeing all of yesteryear’s country music bluegrass digitally re-mastered. If they had a weakness at all, it was unknown to the inhabitants of those stucco walls and full pews. The flushed crowd was so enthralled they wouldn’t have left even if you’d have hollered fire. I caught movement outside of an open window, men were framed in the sills outside to watch the show in the cool night air. Once again, I had a vision of time’s past on this terra firma.

Feet were stomping, hands were clapping I could feel the vibrations in the old plank floor. TBM announced after a song that they felt the percussion under their feet too. Oh, and their closing ovation song? A weird rendition combo cover of the Beach Boys and Ozzie’s “Crazy Train” that was just unbelievable!

I will never forget that night and my hubby echoed the same when we exited the church. I felt as if I’d just witnessed art on the cusp and I’ll count myself fortunate if I ever have the opportunity to see them in such an intimate setting again. The music world seems to concur as The Barefoot Movement is already being described as the future of bluegrass. Press keeps rolling in and Rolling Stone just added to the accolades.

There are plans in the works for more STAC House Show & Awendaw Green presentations. Keep your fingers on the pulse of their activities—you don’t want to miss their events! In the meantime, Awendaw Green is putting on a benefit concert on October 17th at the Windjammer on Isle of Palms for Windwood Family Services 30th year anniversary.